Jeff Halper's  talk on Moday is a vital contribution to the discussion over Israel's NSO sales of Pegagsus electronic warfare tools around the world. There seems little doubt the hacking and 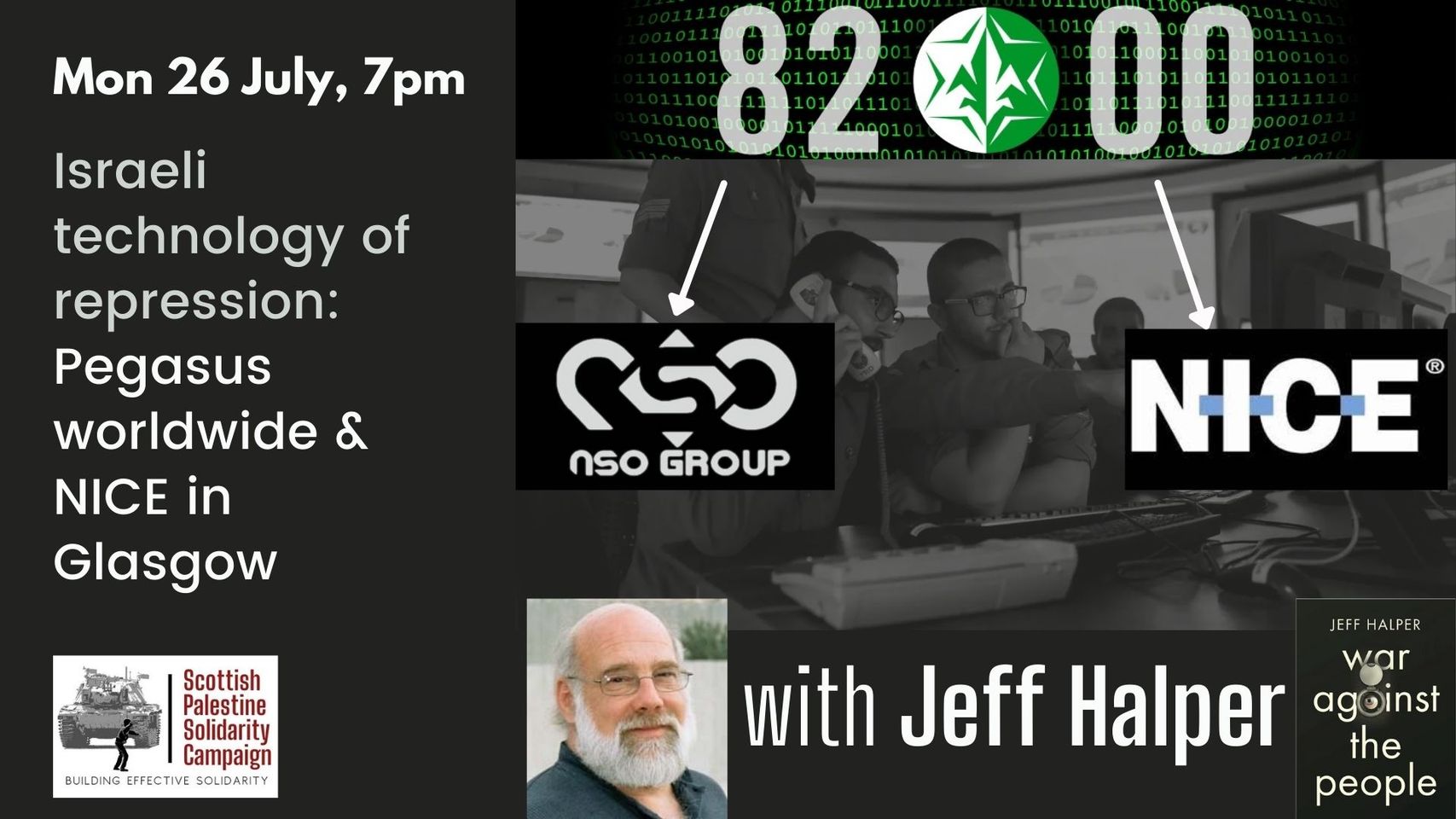 tracking software has been used by some of the world's most brutal regimes to locate, torture or kill dissidents, some of them journalists, as well as to spy on up to 14 heads of state. NSO's Saudi clients used the tool to track, seize, dismember and dissolve Adnan Kahoggi's remains in acid.

Pegasus' other purchasers  have used it to carry out "human rights vuiolations around the world on a massive scale", according to Amnesty. A list of over 50,000 candidates for Pegasus hacking has been leaked.

Shamelessly, the Israeli regime has claimed that NSO sales to the likes of the Saudi head choppers are only approved if they promise not to use Pegasus violate human rights. This from a regime that sold weapons to genocidal regimes in Rwanda and Myanmar, armed and trained the military junta's perpratrators during Argentina's mass killing of the 1970s

NSO hacking has incurred the wrath of President Macron, Apple and facebook and has made world-wide headlines for days. Strange, therefore, that Scottish media and politicians have maintained virtual silence on the issue of the Israeli surveillance system that Police Scotland has operated since 2014 in Glasgow city centre. This hyper-intrusive system boasts facial and emotional recognition software and Chris Wooten, Executive VP of NICE Security Group praised Glasgow as "the first city in the UK...fully utilising the capabilities that NICE Situator can provide.” Police Scotland praised the Israeli surveillance system for the greatly enhanced ability to monitor citizens in public spaces.

Why has no politician or journalist cared to comment on the common source of both NSO and NICE in Israeli military intelligence Unit 8200, whose disturbing surveillance was so destructive of Palestinian society that 43 soldiers resigned rather than carry out the Army's programme of mass blackmail.

SPSC has been trying to get word out about this malign system deployed in Galsgow as a pilot before similar systems are rolled out across the UK. It rarely went beyond our minor corner of the internet. As unopposed as Covid in the UK last year, the virus of Israeli-style surveillance now threatens to spread.

The complicity of politicians and media has allowed a situation to develop behind the backs of the public where now an Israeli  arms manufacturer is bidding for a £21 million contract to run the Traffic Scotland control centre in South Queensferry, within the City of Edinburgh Council.

Palestinan activist Mahmoud Zwareh describes the Israeli surveillance system perfected by a brutal occupation force to crush popular resistance is now deployed by Police Scotland in our largest city and the same sinister forces could be rewarded again with a lucrative contract to use their dark arts to manage Scotland's trunk road system.

A discussion of this Israelisation of parts of Scotland is urgent
Monday 26 July 7pm
Jeff Halper
Israeli Technology of repression:
worldwide and in Scotland
author of
War against the People: Israel the Palestinians and Global Pacification
in conversation with Gerry Coutts
SHARE the event page: https://www.facebook.com/events/2116569668482450
REGISTER: https://us02web.zoom.us/webinar/register/WN_x8ZlX2tmQKSdOq3YZdoLjg